Seoul, the capital city of South Korea, belongs to the league of Asia Pacific’s highly sustainable workplace markets, along with being a cultural hub of the region.

Korean cuisine, cinema and pop music have an immense influence all over Asia, transforming the city into a tourist resort of global appeal, while Seoul’s rank as a business hub, depends on the might of its financial services sector and the power of Korean chaebols (corporations) makes it a well-liked investment terminus.

Close to 10 million people have their homes in Seoul, but the bigger built-up area houses 25 million, which is close to 50 per cent of the population of South Korea. The city’s key sectors are finance, manufacturing and retail. The internet speed provided within the country is among the worlds fastest and public WiFis can be easily reached.

The city proudly carries three primary office districts: the CBDGwanghwamun, the Yeouido Business District (YBD) and the Gangnam Business District (GBD). These CBDs are the country’s heart and soul and longest-serving business districts and also the major shopping areas of Seoul.

They take account for a diverse range of businesses. Though research statistics show a CBD vacancy rate of 16.7%, however, it has exhibited a significant rise in rents since the past few months.

Gwanghwamun – Rise through the Ranks as Seoul’s Premium Business District 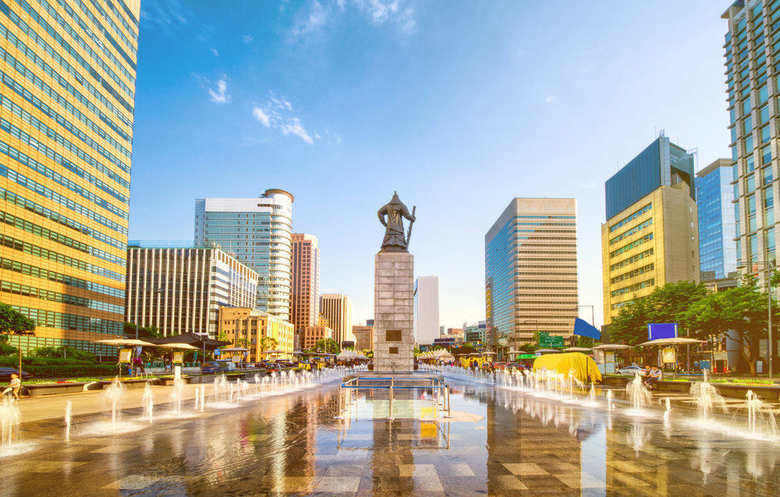 Gwanghwamun, in the heart of Seoul, rules the topmost position in the listing of the country’s business districts, on the parameters of annual sales and sales volume per individual.

Business districts can be ranked on the basis of the statistical data of geography, population, sales, type of business and consumer’s trends of consumption, as well as information on a map.

According to a report, places around Gwanghwamun Station registered the highest sales of 5.8 trillion won ($4.6 billion) in a single year, around approximately eight times hike as against the 2013 review. The area’s separate sales were reported at 3.9 million won.

After blending with the sale figures of adjoining areas like City Hall Station and Jonggak Station, the overall sales figure in the area would exceed 12.7 trillion won.

The swift upsurge of sales near the Gwanghwamun region can be ascribed to the clustered population who went out in public through the whole-month duration torchlight procession and other end-of-the-year events conducted at Gwanghwamun Square.

On the other hand, Apgujeong Station in the swanky Gangnam district was placed at 19th position, a sensational drop from number three, five years ago. Areas near Gangnam Station that registered its best volume of sales in 2013, were positioned at 13th.

Apart from key business districts in Seoul; Nam-gu in Ulsan, Jung-gu in Busan, places adjoining Seohyun Station in Seongnam and Beomgye Station in Anyang, Gyeonggi Province showed up in the top 20 list.

This YBD is present on a tiny island of the Han River, has been in the limelight for its financial residents – the Korea Stock Exchange lives there along with media firms. Lately, it has turned into a hub for foreign-owned businesses, majority of them have shifted to Seoul IFC development; having a combination trio of office high-rises, a hotel and a shopping arcade.

Built by AIG, presently it belongs to Brookfield. The office market in the YBD is still getting used to Seoul IFC’s working premises and Q1 vacancy was 24.4%.

Yeouido sprawls across 8.4 square kilometers of island sculpted by the Han River in western Seoul. The island gets its fame as the big economic district of Seoul, a registered address for several investment enterprises and banks.

Additionally, the island holds the National Assembly where the regulations and political decisions of paramount importance to Korea are conceptualized and framed, the governing agencies of the Korean financial sector just like Financial Supervisory Service, Korea Financial Investment Association and the exemplary buildings like IFC SEOUL and 63.

Yeouido has grown up and matured as a financial district from the last 70's when the KRX (Korea Stock Exchange) shifted base to Yeouido from CBD. Because the district identity looks similar to a financial and banking nuclear center of the city that is geographically placed on an island with a park, YBD is usually known as the Wall Street of Korea. 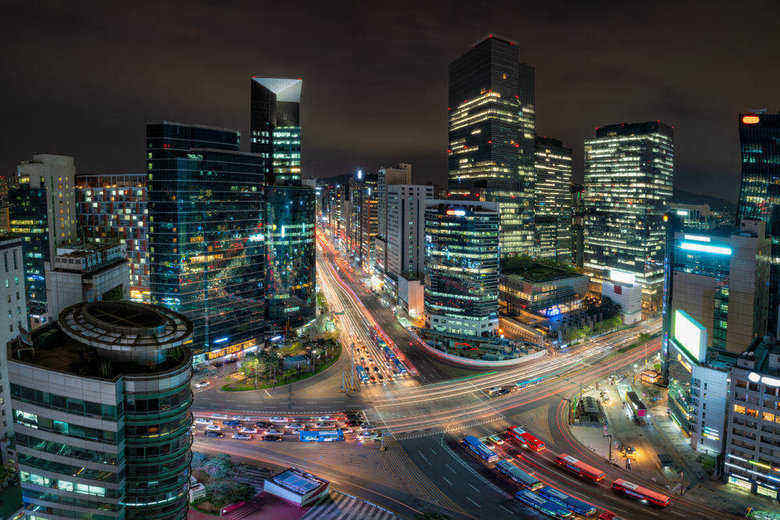 Gangnam is stationed in Seoul, south of the Han River, which splits through the city. It is among the several bridges of the city that bridges Gangnam with the adjoining areas to the north of the Han and also city centers.

GBD (Gangnam Business District) used to be a farming area running in the reverse gear until 40 years ago. Nevertheless, this area has made its footprint as the educational, commercial and focal point in Korea and is armed to the teeth with administrative buildings on Gangnam-daero and Teheran-ro, centered on the Gangnam Station area.

Every kid who loves to dance is familiar with ‘Gangnam Style’, - YouTube has more than 3 billion official views of this video. However, a considerably smaller number of people are aware that Gangnam belongs to Seoul in the capacity of a major office district.

Gangnam houses several hi-tech and media agencies and another name for it is the Beverly Hills of Seoul. It is a highly robust office market, owing to limited resources and available positions of only 5.1%.

GBD is at number two, on the scales of biggest business districts in Seoul, with reference to the entire leasing area of ​​grade A & B office buildings.

Seoul has numerous universal districts. The evolution in the number of foreign nationals is most likely to hit the roof with schemes for foreign investment sectors throughout the town.

When global firms make an entry into the Korean market, one of the initial choices to decide where in Seoul to set up their office. Now we have an overview of the three major business districts that are high-density areas, dotted with office buildings.

Seoul’s Metropolis area comprises 400 logistics centers of area 10,000 sqm or more, with 25% of overall retail online sales. With these statistics, exceeding expectations for the sector is an understatement.

Contact us for clarity and in-depth knowledge of the best place for your new company to operate.